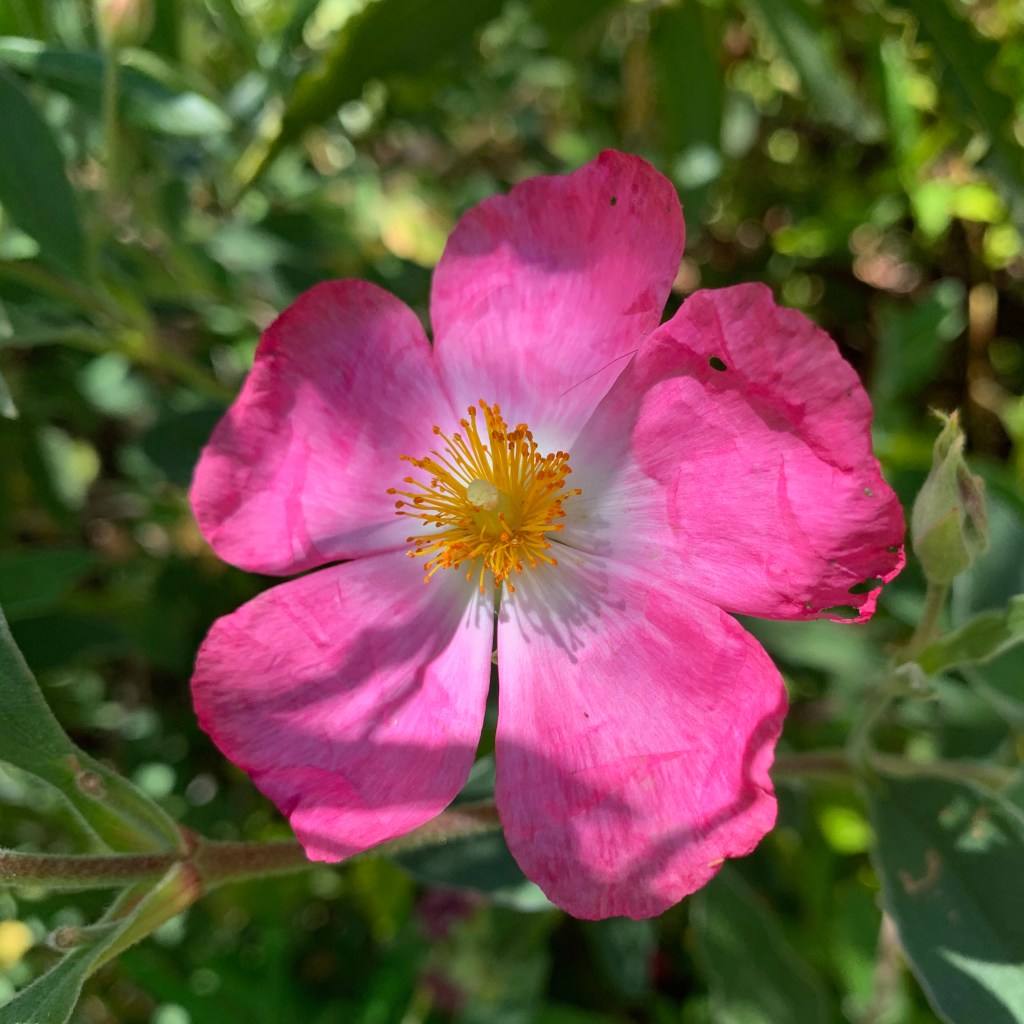 Tom Karwin, on gardening | Thank you for the plants of the Mediterranean – Santa Cruz Sentinel

This week’s episode for the current planting season focuses on the Mediterranean region, which includes 17 European, African and Asian countries surrounding the Mediterranean Sea, as well as the Madeira archipelago and the Canary Islands, nearby in the ‘Atlantic Ocean.

Gardeners in the Monterey Bay area favor plants that originate from a Mediterranean climate, characterized by mild to cool and rainy winters and hot to hot, dry summers. This climate is named after the Mediterranean region, but this label can be troublesome as a similar climate occurs on the California coast, the southern coast of South Africa, the west coast of central Chile, and the southwestern regions. from Australia.

A better and more meaningful label for this climate is â€œdry summerâ€.

Each of these dry regions in summer has distinct native plants, so thematic gardening might devote an area of â€‹â€‹the landscape to plants from one of these regions. This plan invites to showcase the plants of a chosen region and to benefit from their common cultural requirements. UC Santa Cruz Arboretum and Botanical Garden (arboretum.ucsc.edu/) and UC Berkeley Botanical Garden (botanicalgarden.berkeley.edu/) are examples of this approach in public gardens.

Public botanical gardens often organize their outdoor spaces according to geographic areas such as dry summer areas. Some botanical gardens have an Asian garden setting and interest, which combines distinctive plants with a distinctive landscaping style. The Huntington Botanic Gardens (www.huntington.org/gardens) include both Japanese and Chinese Gardens.

The total area of â€‹â€‹the Mediterranean region has not been specified in the literature I have seen, possibly because it does not correspond to well documented political boundaries. The many areas of dry climate in summer make up a small portion (perhaps 5%) of the world’s total arable land, that is, land suitable for cultivation. This makes them special for gardeners.

The dry summer climate in the Mediterranean region shows considerable variation, taking into account differences in altitude and other factors. In addition, some horticulturalists have described three subtypes of this climate: cool, hot and hot summers.

Given this variation, a Mediterranean region of a garden, whether a small or large space, is unlikely to have companion plants, i.e. those that grow together in nature. If it would be possible to develop such a garden, it suffices to group together the plants native to the region to illustrate the category and respect their common cultural needs.

The most emblematic plants of the Mediterranean region are lavender (Lavendula), figs (Ficus carica) and olives (Olea europaea). There are many other lesser-known genera that originated in this botanically rich region.

The following plants, randomly selected from my garden, are a small sample of the horticultural diversity of the Mediterranean region. With any luck, they will suggest to gardeners of the character and interest of the region to include a selection of plants from the region in their own gardens.

European gray sedge (Carex divulsa). This evergreen, clumping herbaceous plant likes partial shade, tolerates swampy soils, and, once established, is fairly drought tolerant. It grows up to 2×2 feet or more, spreads slowly, and makes an attractive addition to many other plants. It was mistaken for a native of California and marketed as the Berkeley Sedge, but it is a broadly distributed European species.

Rose Rose (species of Cistus). This plant is native to Spain and Portugal, hybridizes naturally, has been loved by gardeners since 1860, and is available in 19 species and many cultivars. Popular varieties include Silver Pink Rock Rose (C. argenteus ‘Silver Pink’), White Rock Rose (C. ladanifer ‘Blanche’), and Crimson-Spot Rock Rose (C. ladanifer maculatus). They are short-lived plants that produce flowers in June and July, seeds profusely, and are easily propagated from cuttings. Pinching after flowering helps maintain a bushy shape.

Corsican hellebore (Helleborus argutifolius). It is a hardy plant with cup-shaped pale green flowers from late winter to early spring and attractive leathery foliage. It grows to 4 feet tall and 3 feet wide, which is taller than most hellebores, which are typically only 18 inches tall. After being cut hard after flowering, it produces attractive new growth in the fall. This species is known to seed many new plants each season.

Madeira Island Geranium (Geranium maderense). This largest of the geranium species is a 3ft x 3ft bi-year plant that displays attractive foliage between flowering years. When it blooms, it displays an amazing mass of dark mauve-pink flowers with a dark center, reaching five feet. There is also a white flowered form (G. m. ‘Alba’).

Large Bearded Iris (Iris’ That’s all people). The Iris family includes several versions of bearded iris (grouped by height), variations of Iris germanica, a natural hybrid of I. pallida and I. variegata. This plant was first identified in 1753 and has been hybridized into over 60,000 cultivars with an extraordinary range of colors, color combinations and flower shapes. Iris lovers are challenged to keep up with the latest presentations. One of my favorites is â€œThat’s All Folks,â€ which was hybridized in Santa Cruz and won numerous awards including the top ranked Dykes Medal.

Giant white scilla (Urginea maritima / Drimia maritima). This plant is quite efficient. It produces 18-inch wide leaves from November through summer. The leaves then disappear, and from summer to fall, the plant generates a four-foot flower stalk with an inflorescence of a large number (who counts?) Of white star-shaped flowers that attract birds and the bees. During this process, the large bulb (up to 12 ft wide) divides dichotomously, growing to two bulbs and eventually forming a large clump.

The Cactus & Succulent Society of America will present the â€œYuccasâ€ webinar at 10 am Saturday. Yuccas are typically large, evergreen plants native to hot, dry regions of Mexico and the Caribbean. They are popular for dramatic landscape elements and large displays of white or whitish flowers. Brian Kemble, curator at Ruth Bancroft Garden in Walnut Creek, and prolific author and speaker on succulents, will share his knowledge of the yuccas growing in their habitat. To register for this free event, visit cactusandsucculentsociety.org/.

The Garden Conservancy presents the â€œBeyond Wild: Gardens and Landscapesâ€ webinar at 11:00 am On December 2, garden designer Raymond Jungles will describe his most significant design projects, which are also featured in his new book of the same title. To register, visit www.gardenconservancy.org/, click on Virtual Programs and then click on â€œFall 2021 Literary Seriesâ€. For upcoming Garden Conservancy webinars, click on â€œWinter / Spring 2021 Virtual Programsâ€.

The UC Berkeley Botanical Garden has announced its December webinar schedule. Early offers include â€œVirtual December Butterfly Walk – Beyond the Bay Areaâ€ (11 am, December 5) and â€œWinter Conifers Virtual Tourâ€ (3 pm, December 7). For more information on these free events and other virtual programs, visit Botanicalgarden.berkeley.edu/, click on â€œProgramsâ€ then â€œPrograms and Workshopsâ€.

Consider developing your own collection of plants from the Mediterranean basin. There are both familiar and pleasantly different plants to spruce up your garden.

Tom Karwin is the past president of the Friends of the UC Santa Cruz Arboretum, the Monterey Bay Area Cactus & Succulent Society, and the Monterey Bay Iris Society, and UC Lifetime Master Gardener (certified 1999- 2009). He is now a board member and garden coach for the Santa Cruz Hostel Society. To view photos of his garden daily, https://www.facebook.com/ongardeningcom-566511763375123/. To find an archive of previous gardening columns, visit http://ongardening.com. Contact him with comments or questions at tom@karwin.com.