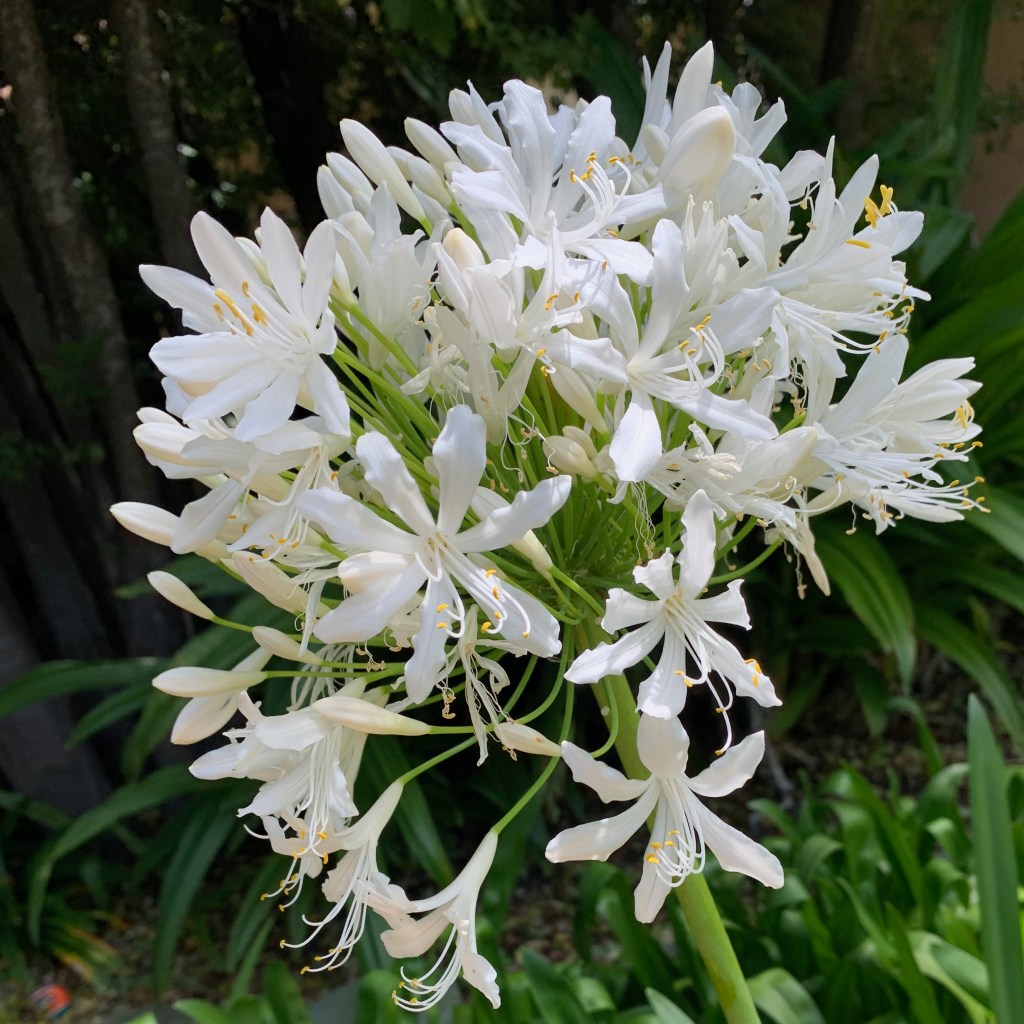 As a reminder, geophytes are perennial plants with an underground food storage organ, for example a bulb, a tuber, a corm or a rhizome. Succulent plant scholars do not consider geophytes to be succulents because succulents store moisture while geophytes store food.

An exceptional work, “The Color Encyclopedia of Cape Bulbs” (Timber Press, 2002) lists 83 genera of these plants, which include some 1,200 species, three quarters of which are endemic to South Africa.

This column presents a small sample of those plants that grow in my garden, as examples of the large and diverse South African geophytes.

We include two arbitrary groupings of these plants: my sense of more and less familiar varieties. You can group them differently.

As a guide, several of these plants include “Lily” in their common names but are actually not members of the Lily plant family (Liliaceae). Such misnames could be based on their resemblance to the familiar flower shape of true lilies.

African lily (Agapanthus praecox ssp orientalis Getty White’). This South African plant is part of the Amaryllis plant family. Its common names include Lily of the Nile, although it is not native to the Nile region. The genus includes seven species, including the familiar A. africanus with purple-red flowers, and the less common A. praecox, which is shown here. Foliage grows from rhizomes up to 2 feet tall by 4 feet wide; the flower stalks rise in summer to 4 feet high. These plants are easy to grow in sun or shade and are often seen in private gardens and community spaces.

Montbretia (Crocosmia ‘Lucifer’). This plant is a widely grown plant among more than 400 hybrid cultivars. They grow from small bulbs and in summer produce clusters of fiery red flowers. Its small bulbs are easily separated, making them easy to propagate and potentially invasive, although they look attractive. They are part of the Iris plant family.

Fortnight Lily (Dietes iridioides). Another member of the Iris plant family, this plant grows from rhizomes to develop 2-4 foot tall clumps of narrow, sword-shaped, stiff evergreen leaves and numerous white flowers marked with yellow and purple. The flowers appear over a long season at two-week intervals (hence the common name), but last only one day.

Flowering herb (Freesia laxa var. alba). Known for its powerful sweet fragrance, this hybrid with creamy white flowers is very popular in the garden. Other cultivars are available in a range of colors, with mixed and single-colored varieties. They grow easily from bulbs, develop stems up to 18 inches tall, and in spring produce tubular flowers 2 inches long.

Red-hot Poker (Kniphofia ‘Pineapple Popsicle’). Although there are over 73 species in this genus, almost all plants grown in residential gardens are hybrids of two or more species. They grow from rhizomes and develop clumps of narrow, grass-like leaves ranging from 18-inch dwarfs to 6 feet. giants. They produce tall spikes of upright, brightly colored flowers in shades of red, orange or yellow, often bi-colored. Members of the Lily plant family, they have a long blooming season, beginning mostly in summer. They grow in full sun or partial shade, depending on the variety, but all require moderate humidity.

Calla (Zantedeschia aethiopica). Sometimes called “Calla Lily”, this plant is part of the Arum plant family (Araceae). They grow from rhizomes, can reach 3 feet tall, and need year-round moisture to produce their attractive white bracts (or spathes) that surround a spike (or spadix) of tiny true flowers. Hybrid cultivars are available in a wide range of spathe colors.

Blue Scepter (Aristea capitata). This plant, a member of the Iris plant family, grows from rhizomes to form linear leaves in 3-foot clumps. tall and broad, with taller stems of true blue flowers with yellow stamens. The most common variety, A. ecklonii ‘Blue Stars’, is very similar.

Snake Flower (Bulbine Frutescens). This plant has bulbous tubers (not really bulbs), from which grow a 2-ft. clumps of succulent leaves and, in the spring, 2 to 3 foot spikes of small yellow flowers. They are part of the Asphodelaceae plant family and are related to Haworthias and Aloes. They grow easily and can be propagated easily from stem cuttings. I acquired a handful of cuttings from a recent garden swap, and I need to plant them.

Bush lily (Clivia miniata). Yet another member of the Amaryllis family. They have been very popular plants in California since soon after they arrived in England from South Africa. The commonly grown C. miniata has orange-red or yellow flowers and (rarely) almost white flowers which are natural mutations. They have pretty dark green, strap-like leaves. Several hybrid cultivars have been produced through various combinations of the four species of the genus.

Natal lily (Crinum moorei). Another member of the Amaryllis plant family, the Natal Lily develops bulbs up to 8 inches in diameter, a flowering stem up to 4 feet tall, and clusters of five to 10 large, open, white to pale pink flowers. In the wild it grows in wet, swampy areas, but it thrives with minimal irrigation in my garden. A recent online interview with Jenks Farmer, author of “Crinum: Unearthing the History and Cultivation of the World’s Biggest Bulb,” described this plant as a garden favorite in the southeastern United States, but it also grows well in the Monterey Bay area. .

Blood lily/brush lily (Haemanthus coccineus). There are 22 species in this genus, a member of the Amaryllis plant family. H. coccineus, among the earliest identified species, has blood-red flowers, hence the common name; several other species have white flowers. The plant has brush-shaped flowers, which appear in late summer, followed by surprisingly attractive broad leaves.

Guernsey lily (Nerine sarniensis). Another member of the Amaryllis plant family, the Guernsey lily is a summer-dormant winter species that develops clusters of funnel-shaped flowers with recurving petals, in colors ranging from crimson to scarlet and pink pale to dark pink. There is also a nice pure white form. The plant has clusters of linear strap-like leaves that follow the flowers.

The Wave Hill Public Garden & Cultural Center, located in the Bronx, New York, announced a new series of webinars, beginning with “New Aesthetics for Public Spaces,” at 3:00 p.m. PST on January 19. The presenter will be garden designer and landscape architect Ching-Fang Chen, described as “passionate about deepening the connection between people and the environment”. In her presentation, she “will share how she merges cultural and ecological values ​​in design to deliver a more essential expression of beauty.” For more information and to register for this paid event, go to https://www.wavehill.org/calendar and scroll down to the webinar title.

Explore South Africa’s botanical riches, especially the succulents featured in a recent column and the geophytes sampled in today’s column. As noted earlier, some South African geophytes are widely grown in California gardens, but other less common varieties offer unusual attractive shapes and a welcome change of pace from the everyday offerings of garden nurseries. They are well adapted to the growing conditions of the Monterey Bay area, so they won’t require exceptional growing skills.

Enjoy your garden and include some exploration!

Tom Karwin is past president of the Friends of the UC Santa Cruz Arboretum, the Monterey Bay Area Cactus & Succulent Society, and the Monterey Bay Iris Society, and UC Lifetime Master Gardener (certified 1999-2009 ). He is now a board member and garden coach for the Santa Cruz Hostel Society. To see daily photos of her garden, https://www.facebook.com/ongardingcom-566511763375123/. For information on gardening coaching and an archive of previous On Gardening columns, visit http://ongarding.com. Contact him with comments or questions at tom@karwin.com.

New Year’s resolutions to make the most of your garden

The internet is full of information about gardening. As we settle into winter, here are some ways to make the most of it.