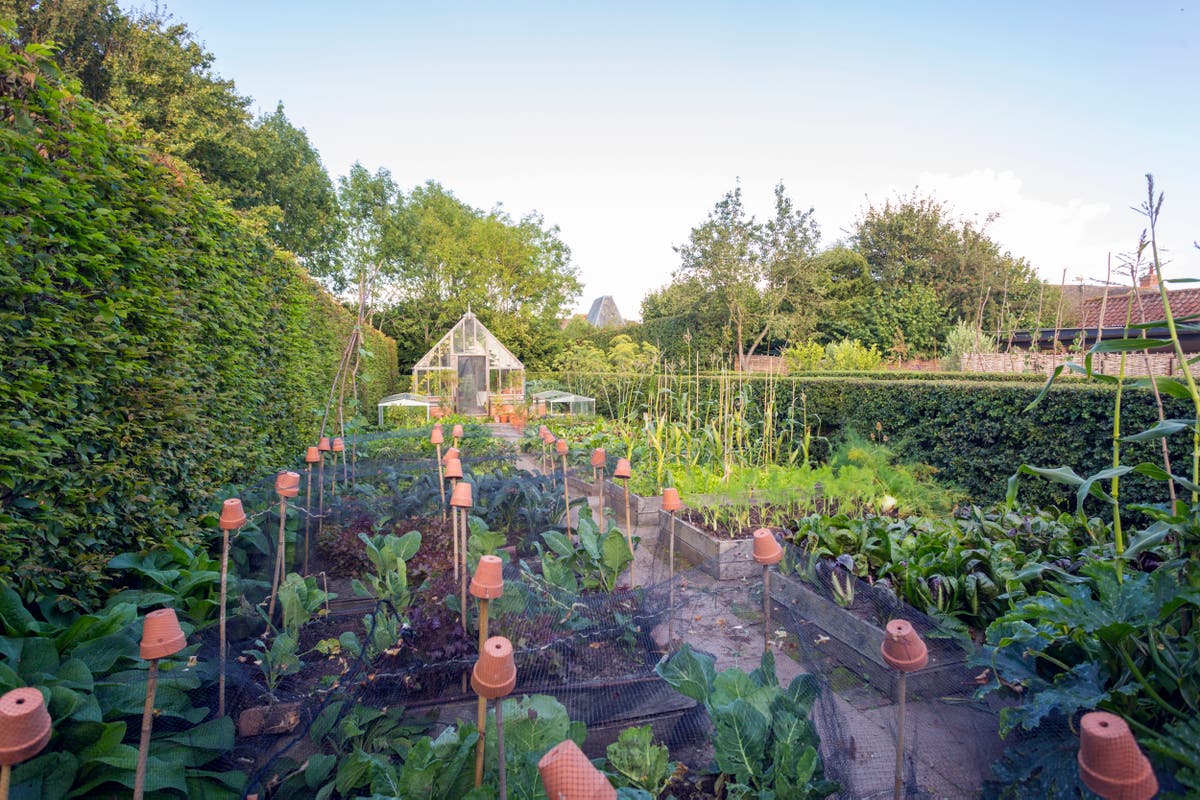 The best books on gardening from roots to roses

One of the things we learned during the lockdown – it seems like a long time ago now – is that happiness is roughly equivalent to having a garden. You could tell the gardeners back then by their smug expressions. Those of us who owned lots counted our blessings.

But the current trend in youth horticulture is probably due to the awareness of the obvious truth that growing your own flowers, fruits and vegetables is just as sustainable as ever. It’s a perspective that informs a lot of new garden books, although it’s not the whole point of gardening, which is being some sort of sub-creator, like Adam in Eden.

Monty Don is the nation’s gardener, the sweet, happy, and handsome guy who makes it easy on Gardener’s World. Lucky Monty: he has two acres to work on; much more than most Londoners. After poor health, he decided he would stick to his homemade patch for both the TV show and this book, The complete gardener (DK, Â£ 27).

It’s excellent and sets out principles that everyone can benefit from. The chapter on planning a garden is particularly useful (think about the space Between plants). There are sections for large gardens, including trees (think before you plant), paths, and lawns (including tall grass and moss), but his observations on working with nature are invaluable to the community. new generation of environmentally conscious gardeners – we should plan for a long flowering season and a range of open-shaped flowers that insects can reach, and embrace dead wood and tall grass. On pests, he tells usâ€¦ “Live and let live”. Ah. I bet he never lost all of his Spanish bean plants to ants. But it is a sensible, practical and comprehensive guide. Complete, in fact.

Sarah raven A year full of flowers (Bloomsbury, Â£ 25) is an account of his year of gardening at his home in Perch Hill, Sussex. Frankly, this is horticultural porn – an idyllic garden and photographic glimpses of the author’s highly enviable lifestyle. But as the title suggests, it’s also a handy guide to getting as many flowers as possible during the year. Sarah Raven is a maximalist gardener rather than an austere tasteful designer: â€œI like plants in a pile, such as you can find in nature,â€ she says. Its objective is “waves of colors which wind up in the garden one after the other”. She therefore plans the succession each season, with hellebores in January giving way to pretty mini irises and violas in February; crocuses and hyacinths in March then daffodils and daffodils followed by tulips (his specialty), and again tulips, from April.

But besides a very useful guide to growing individual flowers – there’s an excellent essay on tulips – it’s also a handy book. There are sections on sowing seeds, forcing Amaryllis, arranging a flowering bulb pattern for successive flowering, making a propagator or teepee for sweet peas or small frames of pots for climbers, preparing a fertilizing tonic for plants and creating a wildflower meadow from like bulbs as well as seeds. You might like to know her favorite cosmos for flowering and scent, is “Purity”, followed by “Dazzler”. Buy accordingly.

Kew’s Gardener’s Guide to Growing Roses by Tony Hall (Frances Lincoln, Â£ 12.99) is a good, how-to guide to an aspect of gardening that seems easy but isn’t always easy. Perhaps the best advice is to buy roses taking into account disease resistance as well as smell and appearance; the book has a useful selection of roses in each category and helpful little guides on things like container planting and training roses. The pest and disease troubleshooting section doesn’t have much about the trendy new companion plant solution – planting roses with salvias, for example, against black spots – but it’s a compact guide. and useful.

from the same author Gardening with drought tolerant plants (Kew Publishing, Â£ 25) addresses what’s already a problem in many areas if not right now – lack of rain – and it turns out that planting in dry conditions doesn’t need to restrict your style. Suggestions on a range of plant categories include lots of familiar favorites – lavender, verbena bonariensis, buddleia, wisteria, and honeysuckle – as well as my least favorite plants, ornamental grasses.

Many of us grow things to eat; and in a small space like my small subdivision, that usually means herbs. Marc Diacono herb / cook’s companion (Hardie Grant, Â£ 26) is a how-to guide to individual herbs followed by helpful recipes. For growing perennial herbs, he recommends adding a layer of compost around the base at least once a year and feeding every fortnight during the growing season – comfrey or nettle tea will do the trick. ‘case. To keep herbs sweet, he recommends chopping them and freezing them with a little water. Full page images are useful for identification, and recipes include salts and infusions, as well as a range of herbal dishes and drinks. Tarragon tendril, are you interested?

Around the world in 80 plants by Jonathan Drori (Laurence King, Â£ 20) is a terribly opinionated guide to a selection of plants from around the world and their place in culture. Our author travels the world through plants, like a planter Phineas Fogg, from nettle and mistletoe here to saffron crocus and mandrake in Southern Europe to Damascus rose in South Asia to vanilla in Africa. Each is illustrated with panache by Lucille Clere. It’s to go and a source of fun facts. Did you know that nutmeg in excess has hallucinogenic effects? Apparently, Malcolm X used nutmeg in prison for a high; it was banned in prisons in the United States to prevent abuse. Or that myrrh was used in biblical times for an antiseptic mouthwash as well as incense and that Admiral Nelson’s body was preserved in myrrh-infused brandy to bring it back to England (which the crew would have drunk in his honor)? There are plenty of them like that.

A cornucopia of fruits and vegetables by Caroline Ball (Bodleian Library, Â£ 15) is a brief account of an 18th century botanical encyclopedia written by a Bavarian apothecary, Johann Wilhelm Weinmann. It was intended to reflect his pharmaceutical and botanical interests, but it is also a thing of beauty, containing a selection of the admired illustrations of fruits and vegetables from his great work. These are excellent vigorous renders of sometimes mundane fruits and vegetables, mainly from Georg Ehret, including brassicas and cauliflower, asparagus and artichokes, lettuce and squash. The prints, in mezzotint and hand-colored etchings, are striking. Who would have thought that cucumber could look so exotic? Or currants so ethereal?

The Oxford Botanic Garden was originally designed as a physics garden to support medical education at the university four centuries ago. His first catalog in 1648 recorded nearly 1,400 plants. Since then it has created an exceptional plant collection and arboretum and is, like Kew, an important research center with a historic collection of botanical works. From roots to seeds by Stephen Harris (Bodleian Library, Â£ 40) is a finely crafted account of the garden, from Root (its origins), which is fascinating, to Seed (teaching botany). The other parts – stem, leaf, bud, flower and fruit – cover the history of collecting and classifying plants and the development of botany. There are fascinating scholars and collectors here, from various countries and disciplines, as well as glorious images from botanical texts.

For enjoyable navigation you can’t beat Robin Lane Fox Thoughtful gardening (Penguin, Â£ 10.99), a collection of his gardening pieces for the Financial Times and still excellent, a decade after his first publication. It’s about flower gardening, based on her experience with her own garden and in her Oxford University garden – it’s a classic with a horticultural twist, or maybe the other way around. Thoughtful gardening, he says, is not about biodiversity or saving the planet; it is “trying to make plants grow well, whatever their origins, and to place them in a framework which suits them and which suits us”. Just so.

The Gardening Book of the Year for Gardening Enthusiasts and Designers is by Tom Stuart-Smith Drawn from the earth (Thames and Hudson, Â£ 50), an account of the work of this great gardener, with some essays by him on his working methods and influences, and a close examination by Tim Robinson of some twenty of his projects, here and around the world. The pictures are beautiful, obviously, and the detailed analysis absorbing, but the best thing about the book are the essays by Stuart Smith himself, who combines lyrical imagination and beautiful prose with practical intelligence. There is an account of his discovery of the secret garden of the casino of Villa Farnese in Caprarola which is quite magical.

His concept of garden psychology is as much about the human mind as it is about horticulture, but the discussion of our longing for a lost paradise (which was a garden) is rooted in real and spellbinding places. â€œThe more I thought about gardens and their relationship to the surrounding landscape,â€ he writes, â€œthe more I see [it] like a constant conversation between the internal and the externalâ€¦ The garden becomes a moving metaphor of the individual in society, being less a walled fortress than a place permeable to influenceâ€¦ Gardening becomes an endless balance between content and connection. ” Marvellous.

How “guerrilla gardening” can change your city