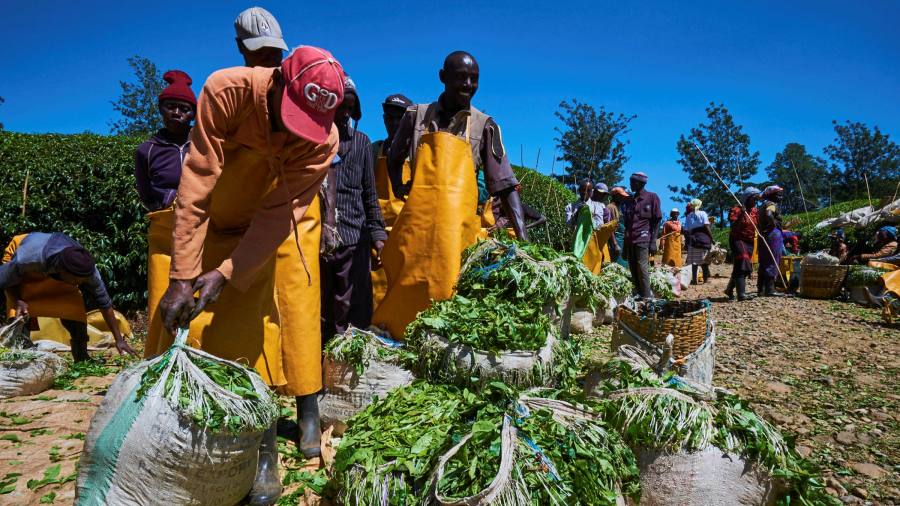 Planting conditions in spotlight as Unilever tea sales heat up

After acquiring his first tea estate in Ceylon, now Sri Lanka, in 1890, Scottish entrepreneur Sir Thomas Lipton set out to bring the drink to the masses by transporting it “straight from the tea garden to the teapot”.

The Lipton-founded operation has become the largest tea company in the world and it’s now on the block. Unilever, which owns Lipton and other big brands such as PG Tips and Brooke Bond, is leading a sales process for the tea sector as growth has faltered.

He partly retained an integrated business model like that of Lipton, owning both brands and tea plantations. This means that any buyer of the division now named Ekaterra will have to decide how to deal with sensitive issues of human rights and fair pay on three large plantations owned by Unilever.

Private equity groups including Advent, Carlyle and CVC have bid for the division, which has €2bn in annual sales and could bring in £4-5bn, people familiar with the situation said. Second-round offers are expected on Tuesday, although Unilever said it retained the option of a partnership or an initial public offering.

As it handles the sale, Unilever is looking behind the scenes to solve a problem that has obsessed the tea division. His Kenyan company has launched a review into allegations that it failed to adequately help workers affected by an attack on its 8,900-hectare Kericho plantation amid ethnic violence in 2007.

Seven people were killed, 56 women raped and many injured in the assault, according to a complaint filed by 218 Kenyans last year with the UN Working Group on Human Rights and Transnational Corporations and the United Nations Special Rapporteur on extreme poverty and human rights. They are asking for medical and psychological treatment and compensation.

This complaint followed the failure of a civil case in the United Kingdom: the London Court of Appeal decided in 2018 that the case should be brought before the Kenyan courts and that the plaintiffs had not shown that Unilever’s UK-based parent company had a duty of care. The Supreme Court denied leave to appeal.

Unilever has appointed an independent expert to conduct its review, a person briefed on the matter said. Affected workers are hoping for a result this year, the person said. Another person said the review had nothing to do with the spinoff.

Unilever said: “Although the UK courts dismissed the allegations against Unilever and ruled that we could not have foreseen the terrible violence after the 2007 elections or been held responsible, Unilever Tea Kenya nevertheless felt that the right thing to to do was to check whether any claimants had not received the support he was providing to other employees at the time and, if so, to make up for what they missed.

He said he would cooperate fully with UN bodies if they investigate.

The workers’ complaint says their wages were suspended for six months after the attack, while those who returned to the plantation were given financial aid of £80, around one month’s wages. Unilever said earlier it had provided “significant support” to the victims, including “compensation in kind”, replacement of destroyed property, medical treatment and counselling.

While Unilever does not own Sir Thomas Lipton’s former plantation in Sri Lanka, it does own estates in Kenya, Tanzania and Rwanda, where thousands of people live and work.

Such estates date back to the British colonial model, which established plantations in remote areas, bringing in workers and their families from elsewhere, said Sabita Banerji, chief executive of Thirst, an international roundtable for sustainable tea.

Workers in these fields “are completely dependent on management for their livelihood,” she said. These workers, as well as the smallholders who supply the product, are particularly vulnerable to poverty, she added.

Unilever belongs to the industry’s Ethical Tea Partnership and says it has several programs to address the “social challenges” of tea, including women’s empowerment programs that have reached 600,000 people in Kenya and India. It says the salary at Kericho is “significantly above the tea industry average”.

More recently, it has come into conflict with Kenyan unions because it is automating picking and reducing the number of workers.

Those issues can still affect any sale, said a banker familiar with the process, who said potential buyers were concerned about environmental, social and governance issues. Another banker said bidders might overemphasize the latter in a bid to buy Ekaterra cheaply.

These social issues are among the biggest challenges for global tea brands, said consultant Angela Pryce. “These brands are often very price sensitive. . . so it’s hard to see an easy solution,” she said.

At the same time, the market is slowing down as drinkers in wealthier markets turn to alternatives such as coffee, herbal tea and kombucha.

Julia Buech, an analyst at Mintel, said black tea had suffered a “slow but steady long-term decline” in many Western markets, briefly interrupted by the pandemic.

In India and Indonesia, where consumption is on the rise, Unilever is retaining its tea business and will also retain its iced tea partnership with PepsiCo. But premium and herbal tea brands such as Pukka, T2 and Tazo will join Ekaterra.

There’s a lot riding on the sale for Unilever. Its shares have fallen 5.7% since Alan Jope took over as chief executive in 2019 and he is seen as a potential target for activist investors.

“Shareholders are unhappy with the returns they are getting from Unilever. . . Management is under pressure,” Jefferies analyst Martin Deboo said.

Tea elimination will be the biggest since Jope took over. Still, some observers suggest Unilever missed a trick. Jamie Isenwater, founding partner of fund managers Ash Park Capital, which holds a stake, said: “It’s about the right strategies rather than the right categories. . . there are many things you can do in tea.