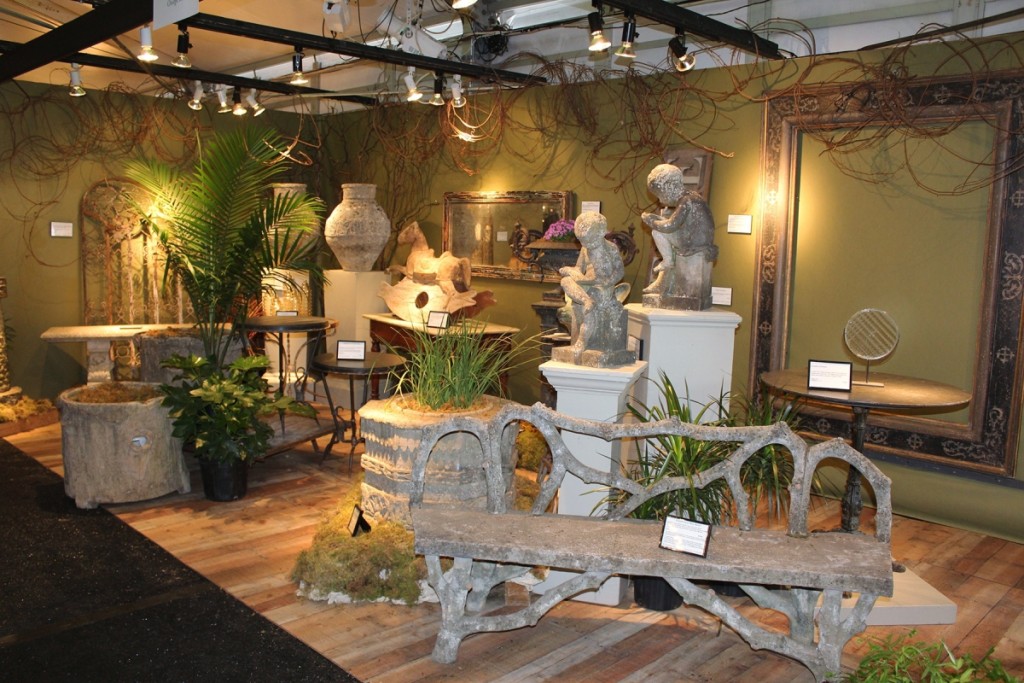 Review and photos by WA Demers

BRONX, NY – Winter-weary locals in the Tri-State area threw away the gray, soggy remnants of that stubborn season when the New York Botanical Garden’s Antiques and Art Fair blossomed with a gala evening in preview, supplemented by a sale of collection plants, on April 11th. The event continued through April 14 in a 10,000 square foot tent at the New York Botanical Garden. On opening night and throughout the weekend, the space was the scene of landscape inspiration and commerce, with vendors offering everything from classic furniture to garden antiques – some with a modern touch – to fine art, sculptures and decorative accessories. A central feature of the show was an arbor created by Manscapers NY, an exterior design and landscaping firm based in Williamsburg, Brooklyn, accented by a large, elegant ironwork sofa, fashioned by the northern metalworker New York State, David DeSantis.

Attendance at the fair, from Thursday to Sunday, totaled 5,564 visitors, including the preview night, according to the garden’s public relations manager, Nicholas Leshi. “Overall, more than 23,000 people visited the New York Botanical Garden during the outdoor furniture and antiques show,” he said.

It’s a boutique show. Manager Karen DiSaia had 21 dealerships she had assembled, including many regular exhibitors and a few new faces.

The sold stickers bloomed throughout the evening on opening night, including on several large pieces, such as a cast stone table with three semicircular benches, a large urn and an armillary in Reading, Penn. ., Schorr & Dobinsky dealers; a pair of early 20th century Canova style cast stone lions and a bronze fountain with Pan figures at the Village Braider, Plymouth, Mass. Another early sale was a cast iron urn with elephant head handles that was not only rare but “very, very rare,” according to the information label placed on it by the guys at Period To Mod, also known as the name of Tim Brennan and Dave Mouilleseaux, Briarcliff Manor, NY The urn could have been English or French and it dated from the Raj period, circa 1870-90.

In addition to the large metal urn, Period at Mod featured a set of cast iron tower clock figures, probably English, circa 1880, a hand-carved wooden lion rampant bas-relief, circa 1930, and a Monumental single log hand carved bull mastiff, circa 1950 – the final two pieces of evidence that not everything in the garden has to be metal or stone.

Garden antiquities specialist Barbara Israel, Katonah, NY, said she was impressed with how the center of the show had been reworked with input from Carrie Barrett, the Botanical Garden’s new director. “The U-shaped bar in the center has become a hive of activity [on opening night]she said, who “had great energy.” She added: “I had a really good show, three times better than last year. The fact that the porters pick up the pieces sold and deliver them as quickly as possible has long been one of the delights of the show. Buy it Thursday evening, receive it Friday morning! Other than Amazon, when does this happen? » 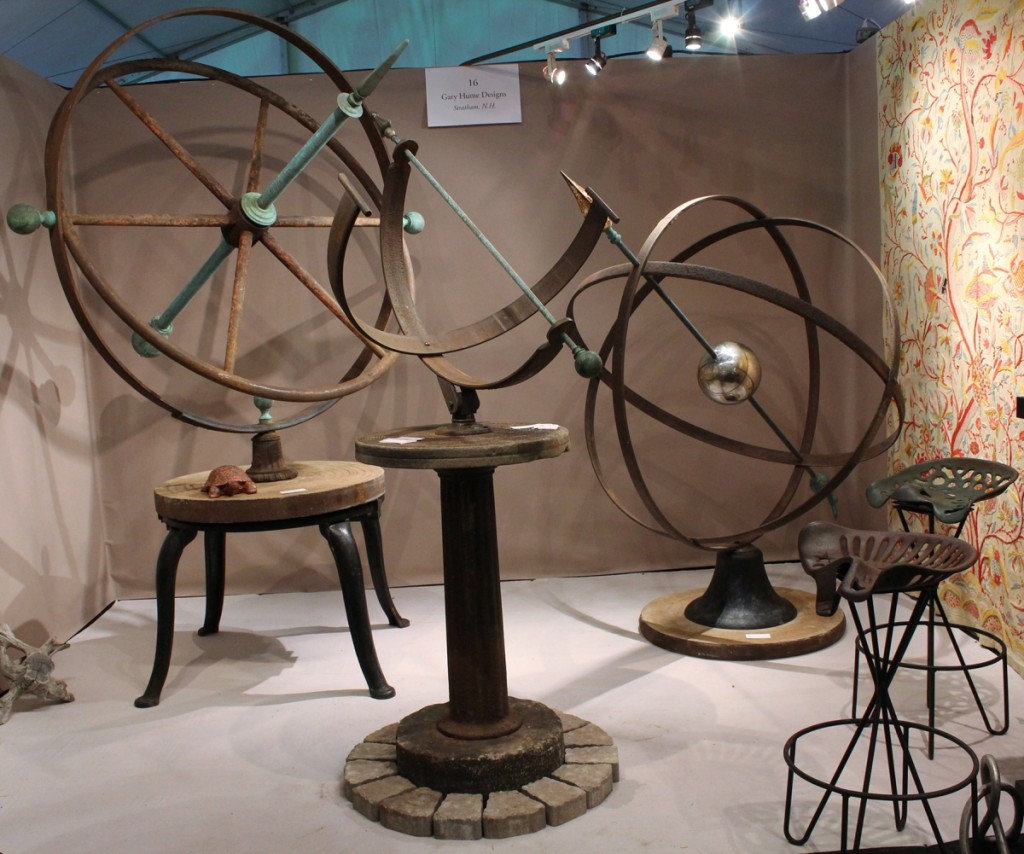 Gary Hume is a metal artist from Stratham, NH Best known for his armillary type sculptures, he filled a small space at the living room with some of his creations.

Highlights of Israel’s booth included a rustic-style sofa made with natural bittersweet vines; a low, wide planter in round composition stone by Willy Guhl for the Swiss firm Eternit, circa 1970; and a rare zinc figurine of “Diana de Gabii”, American or German, circa 1880. This last piece was one of many replicas derived from the original which was excavated by Gavin Hamilton in 1792 at the Borghese estate in Gabii, in Italy.

For Rayon Roskar, a dealer from Switzerland who was presenting this show for the second year, it was an opportunity to present his examples of Swiss design, including a monumental limestone “hand” that seemed poised to capture the contents of ‘a stone. planter filled with foxtail fern and three types of mosses. Created in 1995 by Swiss sculptor Thomas Blumer (b. 1964), the monumental limestone “hand” of Roskar’s Brooklyn, NY stand can be repositioned in multiple ways.

“We love the Botanical Garden show,” Roskar said. “Our second year here hasn’t been as financially profitable as the first, but that has nothing to do with the show. Sometimes the timing is off. It’s something we’ve learned to live with as as micro business and for antique dealers in particular. We will certainly be putting on the show again when we are granted a place on the site next year. Positive sales on opening night are crucial to the success of a show.

Roskar said his booth was overflowing with smartly dressed ladies and celebrities – “a very exciting evening of food, cocktails and talk. I even met Sigourney Weaver, one of my all-time favorite ladies. And always a pleasure to chat with Kevin Sharkey and Martha Stewart.

It had only been a week since Kingston, NY, dealers Judith and James Milne packed their bags after a successful show at Lyndhurst Mansion. Here, a charming pair of cast iron mermaids from a Connecticut estate were seen lounging seductively in their booth, along with more traditional figurative creatures like cast stone frogs, turtles, lions, dogs, rabbits and others. There were plenty of cast stone planters and vases, including a pair filled with old-fashioned painted and weathered 19th century pewter flowers. An unusual bowling game on the lawn featured six cheerful penguins with numbers painted on their chests. 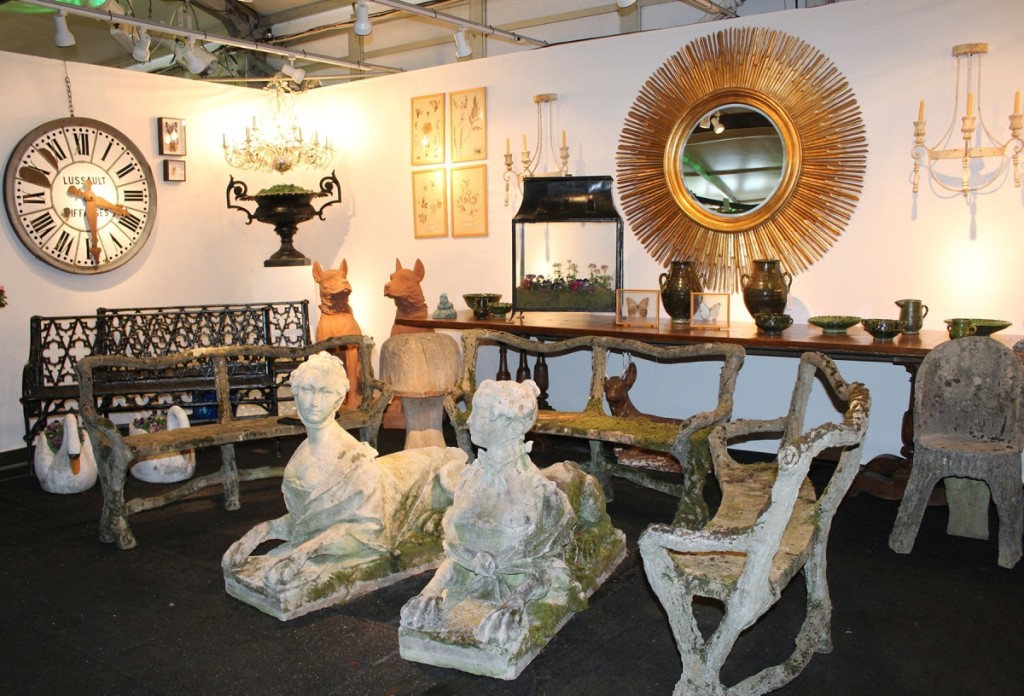 Similarly, More & More Antiques, New York, had a quick turnaround from the previous weekend’s show in Lyndhurst, filling its space with monumental pieces like a cast stone fountain and surround that took up much of the space. of the stand, a recumbent abstract sculpture in white marble, a carved Italian marble birdbath, circa 1890, and a pair of carved copper and wood pedestals. A supplier of American and European antiques to New York and surrounding suburbs, the company is a great source for interior designers and homeowners looking for antiques, with inventory ranging from chandeliers to Christmas decorations from the Old World.

New faces on this year’s show included a trio from the UK. Jeremy Stopford and Max Kuipers represented David Harber Ltd, Oxfordshire, UK, best known for his outdoor sculptures which adorn public and private spaces around the world. Inspired by the interplay of light and reflection, Harber uses materials such as brass, copper, bronze, stainless steel and stone to create pieces that invite the viewer to question what he sees and to bring him into another dimension. Front and center of the cabin was “Torus,” a 6-foot-by-6-inch-diameter metal sculpture using gleaming mirror-polished stainless steel, convex curves, and sharp seams and combining them with a central portal hole to contrast and connect with its surroundings. The company also makes scaled down versions of the original, which can be surface or wall mounted. “We enjoyed exhibiting at the show primarily as a marketing exercise and Thursday night provided that,” Stopford said after the show.

Garden show veteran Jeffrey Henkel returned this year, lining the walls of his booth with what at first glance looked like a satellite test chamber, but in reality was a collection of vintage balloon-making molds of an Indian factory that closed about 30 years ago. The Pennington, NJ dealer turned them into unique industrial salvage wall art, with lollipop-style wooden molds attached to a wooden base with remnants of the original paint. When making balloons, the molds were dipped in the liquid rubber or latex, then removed and the coating cured in an oven so that the rubber assemblies could then be peeled away from the shape. Today, and especially grouped together as Henkel had presented them, the molds create a decor that is both industrial and primitive.