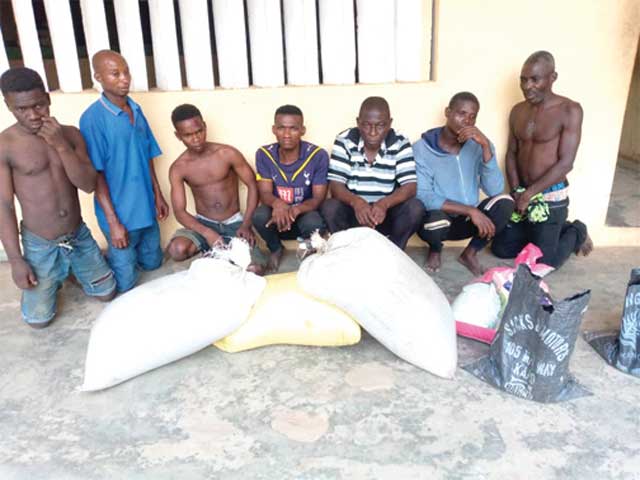 Officers from the Ogun State Police Command have arrested seven suspects in connection with a large tract of Indian hemp plantation.

The suspects, namely; Nelson Enu, Patrick Emmanuel, Samuel Paul, Ekioya Joe, Monday Okoro, Endurance Eliobe and Stanley Ogejiagba, were arrested by officers from Isara Division Headquarters, following credible intelligence that the suspects cultivated a large tract of land for the purpose of planting Indian hemp. weeds at the village of Lokuta in the Remo North Local Council of the state.

It was also established that the suspects were threatening the lives of the villagers, for daring to disturb them during the planting.

On the information, the Divisional Police Officer of Isara Division, Shobiyi Oluwatoshin mobilized his men in collaboration with local militiamen and went to the scene, where the suspects were arrested.

Five bags of suspect Indian hemp seeds were recovered there, while two bags have already been planted.

MEANWHILE, Police Commissioner Lanre Bankole has ordered the immediate transfer of the suspects to the State Department of Criminal Investigations and Intelligence (SCIID) for onward transfer to the National Drug Enforcement Agency (NDLEA) , for possible prosecution.