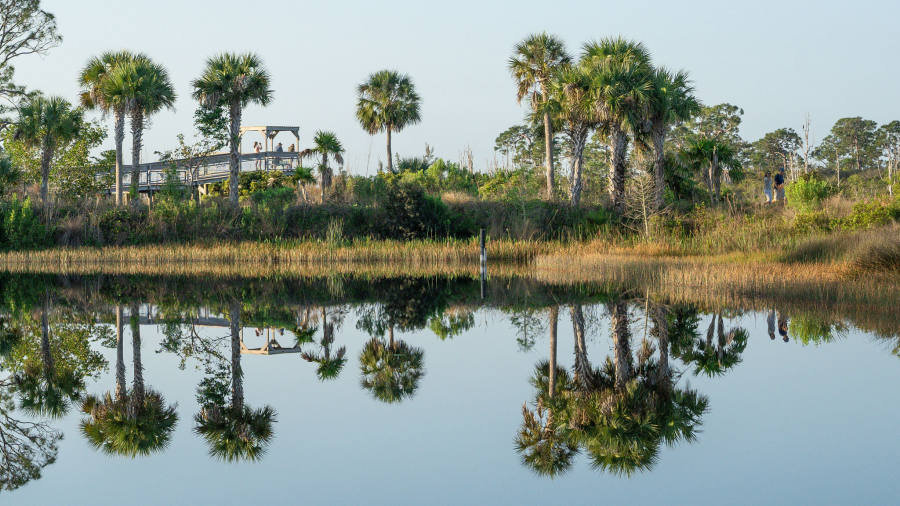 How an overgrown Florida wilderness became a botanical garden

In the event of a disaster, replant immediately. It may be a raging badger. This may be one of the gusty storms of the past month. “Adversity is my friend”, I was first taught by filmmakers, quick to exploit the unexpected. The same goes for gardeners, as I have just verified in a climate and landscape that would have deterred me from starting a garden.

The recently created Botanical Garden in Naples, Florida spans 170 acres. It has four lakes, a Brazilian garden, a Caribbean garden, and even a grass river. The trees and shrubs are wonderful and the wildlife would quickly devour my March Mad Hares.

Amazingly, it was created in just 10 years, from an overgrown wilderness. Its trees appear mature by cold British standards and much of its grounds have been cleverly landscaped by guest designers.

The result is definitely worth a visit, but since summer is tropical, March or November are the months most recommended by head gardeners. A young team of 20 gardeners and a hundred volunteers maintain the large site exceptionally well.

The annual budget is now $9.2 million, from events, giveaways, tickets, and more. Since 2016, the garden has been led by Donna McGinnis, formerly at the Missouri Botanical Garden. Morale is remarkably high.

I like the origins of the garden. In 1993, three citizens of Naples simply decided that their city needed a botanical garden. They put an ad in the local library asking for possible sites and ideas.

Several good ones arrived, but the breadth of their thinking was transformed by a veteran of the consulting world, Harvey Kapnick, the former CEO of Arthur Andersen (now Accenture). True to his training, he told them to think on a much larger scale: he and his family then helped them do just that.

The budding gardeners acquired buildings in an out-of-town shopping center and used them as offices. They purchased over 170 acres of marshland and set about clearing the encroaching vegetation.

Worse was the thick cover of melaleuca, self-seeding honey myrtles from Australia. The only way to remove them was to chop them individually with machetes, then spray the cut trunk of each plant.

I asked Brian Galligan, the garden’s head of horticulture, how he did the job. “Prisoners,” he replied. He arranged for 24 inmates from the local jail to come out on the day of their release and help clean up.

This use of labor has a history in gardening. During the weekends of the late 1940s, prisoners were deployed to clean and prepare the Isabelle Plantation in London’s Richmond Park, now one of the city’s spring wonders.

In Florida, they found the job more difficult. Working alongside garden staff and contractors, they insisted after three months that they would rather return to jail. Led by Chad Washburn, assistant garden manager, the volunteers carried on without them.

The garden features mangroves and pathways through Florida scrub and local flora. It is also home to wild alligators, snakes and panthers. Cotswold squirrels and rabbits look tame by comparison. Pythons sometimes slip out of clearings, so I asked Galligan if he was worried about them.

Not really, he replied, because visitors stay on the paths: “The biggest danger is a visiting grandmother in a Bentley.” Some 220,000 visitors now come each year and none have ever been harmed by a reptile.

In 2018, the garden was devastated by Hurricane Irma. About a third of its trees were uprooted, but staff bravely tackled the damage. They found they could straighten and replant many trees whose roots had been pulled out of the ground and whose trunks were flat.

Gardeners have special experience in dealing with storm damage and can help gardens that are also affected. Their results are remarkable. No visitor, just two years later, would ever realize what chaos had recently plagued the plantations.

I marveled at a mahogany tree, decapitated by Irma, which has now returned to a second spurt of vertical growth. Large Caribbean trees have been put back in place by wires and look no more damaged. The lesson, as always, is to look beyond the next morning.

Florida’s climate helps as well as hinders. For half the year it is subtropical but in the summer it becomes humid and tropical. Market gardening is active in Naples, but mainly tackled in winter.

The trees are growing at a speed that makes me nostalgic. As we passed by impressive kapok trees, Galligan explained that they had been grown from seed sown only two years earlier.

Since the start of the Naples garden in 2010, my own long-term plantings have crept upwards, magnolias at 5 feet tall and a clerodendron at even less. In Naples I admired a group of the beautiful Clerodendrum quadriloculare, native to New Guinea and much prettier than those we can grow in Britain. The trees were already 10 feet high.

The garden rightly avoids large plantings of temporary bedding plants for a flowery display. Nevertheless, it has stunning wild begonias under some trees. In a small yard, excellent orchids are attached to a central tree trunk when in bloom.

The game of the ground plan, the plantation and the hundreds of unknown trees give the place its main magic, maintained on the edges of natural lakes and swamps.

A crucial design contributor was Raymond Jungles, a former associate of Brazilian maestro Roberto Burle Marx. His ground plan for the Brazilian garden centers on a cleverly formed dark pond whose water appears to flow into the small lower valley below.

It relies on an abstract mural in the style of Burle Marx, similar to the one Jungles set as its main design element for last year. big burle marx show at the New York Botanical Garden.

Welcome to a new newsletter for smart people interested in the real estate market and curious about design, architecture and interiors. Every Friday, in your inbox.

Gardeners recall planting one of the pergolas with Jungles himself, which marked out in white chalk the location of each pillar and climber as a Florida hazard, forked with lightning, erupted around them. The climbing plants in the garden are superb, from the pale blue Sky Vine to the many epiphytic orchids and plants that cling to tall tree trunks.

There was no limitation of plantations to so-called “native” plants. Rather, the criterion is regional suitability, allowing the garden to be beautiful and instructive at the same time.

During my guided walk, I met many new friends: Verawood from Colombia, Jureme trees from Brazil, where they have always been Burle Marx’s favorite, Silk Floss trees that are at their best in early November, and a Caribbean Spring Black Olive, a Bucidia that gardeners in Florida haven’t yet realized is a great plant for them too. Tall bushes of fragrant white gardenias are quite happy outdoors.

The soil throughout the garden is extremely alkaline, well beyond the levels I complain about at home. How many of you have made a large garden in the past 10 years under the trees where it is pleasant to stroll in the evening? If the panthers allow it, I might spend my 90s planting in Florida and chasing young pythons away with my rod and shovel.

To follow @FTProperty on Twitter or @ft_houseandhome on Instagram to discover our latest stories first. Listen to our culture podcast, Culture Call, where editors Gray and Lilah explore life-shaping trends in the 2020s, interview the people who are innovating and take you behind the scenes of FT Life & Arts journalism. Subscribe on Apple, Spotifyor wherever you listen.