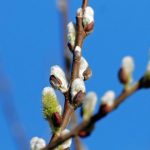 After a cold and wintery March, daffodils are starting to appear on the island, which hopefully indicates that April will be a more spring-like month. But with the warmer weather also comes the list of April gardening chores.

Once those spring chores are done, you can look forward to the first weekend in May when Brent and Beck Heath of Brent and Becky’s Bulbs arrive at Fishers Island. The Heaths have been hybridizers and growers of daffodil bulbs for four generations in Gloucester, Virginia.

Tom Armstrong, when he was director of the Abby Aldrich Rockefeller Museum in Williamsburg, hired Brent to lay out a daffodil garden for the museum. Brent has done many garden restorations throughout his career and recently designed the new daffodil facility at the New York Botanical Garden.

When Tom was designing his garden on Fishers Island and wanted to include daffodils, he again asked Brent for his advice. The daffodils that we have all enjoyed at Hooverness for so many years were selected by Brent and Tom.

Brent will lead a workshop on daffodils at the Community Center on Saturday morning May 7 and give a talk at the Museum this afternoon. Information about these two events can be found HERE on fisherisland.net. I know it will be a very enjoyable and informative weekend for all of us.

Does landscaping increase the value of the house?