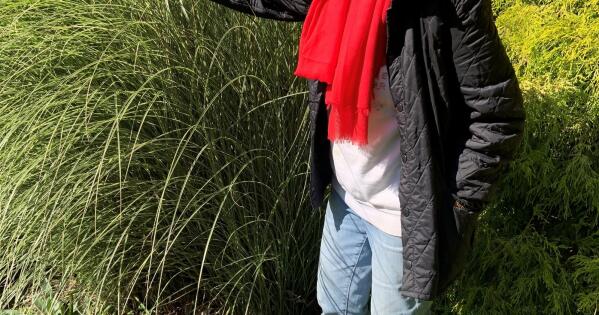 For the love of gardening: an affinity for grasses

I have always had an affinity for grasses. Growing up in rural Connecticut, my parents’ house was surrounded by farms and fields of timothy hay. For me, haymaking was an exciting event because the farmer next door lifted me up on the broad back of one of his work horses. It was exciting to be so high. Slow and steady, the horses trudged back and forth, pulling a dump rake behind them.

The rake had two wheels and was operated from a seat between them where the farmer controlled the lifting mechanism. When enough hay had been swathed, he used the lever to lift the rake, leaving a neat roll of freshly mown hay. The hay was later stacked on a cart and dragged to the barn. Timothy’s Hay (Phleum pratense) was the favorite food of cows and horses at the time. The flowering stems, which are 20 to 40 inches tall, look like very small green cat tails.

Ornamental grasses are much larger and bolder plants. At the back of my long perennial border, one of the mainstays of the late season garden is Maiden grass (Miscanthus sinensis var gracillimus), which has thin blades a quarter of an inch wide and about six feet high. Since it has been in place for years, the clump has grown to at least 30 inches in diameter. The effect of the slender blades is similar to that of a fountain, and the flower heads, which come later, are quite dried and used in arrangements.

Closely related zebra grass (Miscanthus sinensis var. zebrinus) is taller, peaking at six to nine feet, and even more conspicuous with broad horizontal striped cream bands. Mine is about seven feet tall and has grown into a big, beautiful clump. The prettiest of all is perhaps the cultivar ‘Morning Light’, which is rather smaller than the rest and quite refined – five to six feet tall, with silvery foliage.

These herbs all love the sun, the more the better, but the Japanese forest grass (Hakonechloa macra ‘Aureola’) actually prefers shade. Although it can tolerate more sun than many woodland plants, it is happier at the edge of the forest. The plants are low growing, just over a foot tall, with arched foliage of a beautiful yellow with dark green longitudinal stripes. It creates a welcome light spot in a shaded border, and this summer I used it in containers with dark red coleus and chartreuse sweet potato vine.

At the back of the perennial border, tall grasses pair well with Joe Pye grass, a native plant that decorates roadsides and grows in overgrown fields. It has recently acquired a long and difficult botanical name, Eupatoriadelphus maculatus, but you can certainly be forgiven for calling him by his common name.

I have a white form of Joe Pye grass that towers over even the tallest grass. ‘Bartered Bride’ grows up to ten feet and looks down on its shorter cousin, ‘Gateway’, which has stems six feet each culminating in a large cluster of branching pinkish-purple flowers. Elsewhere in the garden, I planted ‘Little Joe’ and ‘Baby Joe’, smaller parents of ‘Gateway’, both less than five feet tall and have proportionately smaller flower clusters. The Joe Pye Weeds and ornamental grasses are a heavenly marriage.

Wherever there is room at the end of the long border, rue des PrÃ©s (Thalictrum rochbruneanum ‘Lavender Mist’) fills among the grasses with its tall purple stems, delicate foliage and clouds of tiny flowers. It self-sows and is welcome wherever it appears.

But the star of the end of season garden really is Sedum ‘Autumn Joy’, which will be in full bloom around early October. This foolproof, long-lived perennial is in a class of its own. From the time rosettes of succulent blue-green foliage appear in spring until the end of the growing season, it makes a welcome contribution to the garden.

At this point, the flower heads are fully formed and will soon begin to turn from pink to pink, the color gradually deepening to rust and finally brown. Even in winter, the plants retain their upright stature, and the flower heads are nicely covered with snow. The herbs are beautiful also in winter. Although they can be rather messy when dry and blown by the wind, they are still wonderful plants and give me pleasure in all four seasons.

If you want to learn more about these graceful, easy-to-grow plants, expert Rick Darke literally wrote the book on the subject, The Grass Encyclopedia for Inhabitable Landscapes. It covers the selection, planting and propagation of true grasses and related plants, such as rushes and cattails.

Love your gardening, until next time!

Sydney Eddison has written seven books on gardening. Additionally, she collaborated with the Color Wheel Company on The gardener’s color wheel: a guide to using color in the garden.

For her work as a writer, gardener, and lecturer, she received the Gustav AL Melquist Award from the Connecticut Horticultural Society in 2002; New England Wild Flower Society Kathryn S. Taylor Prize in 2005; in 2006, the bronze medal of the Federated Garden Clubs of Connecticut. In 2010, his book Gardening for a lifetime: how to garden more wisely as you get older won the American Horticultural Society Book Award.

A former drama teacher, longtime gardener and Newtown resident for 60 years, Eddison’s love for the English language has found its most satisfying expression in four volumes of poetry: Where We Walk: Poems Rooted in New England Soil (2015); Fragments of Time: Poems of Gratitude for Daily Miracles (2016); All the Luck: Poems Celebrating Love, Life, and the Enduring Human Spirit (2018); and Light Of Day: Poems of a lifetime of research and listening (2019).

Sydney Eddison has always had an affinity for grasses. â€”Cynthia Kling photo

Ornamental grasses are much larger, bolder plants that remain hardy and strong well beyond their peak of growth each season, as evidenced by this Miscanthus in the fall. â€”Photo by Kimberly Day Proctor